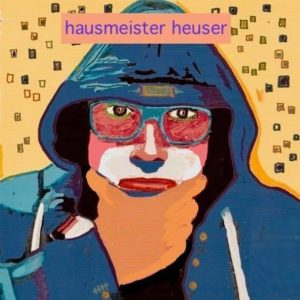 hausmeister-heuser a.k.a. Jochen Heuser (born 04.12.1949) became almost addicted to making pictures at the age of 68, although he had never studied art, never learned to paint, and never considered himself a painter, since he had finished school with an at best unremarkable A-levels and left his hometown Leverkusen behind.
As a young man he was a passionate basketball player. He loved and experienced the “revolutionary” days of pop music in the 1960s. He became someone who knew many varieties of popular music, a “lexicon” for his friends, although he never learned to play an instrument. He went to university, listening to lectures on sociology, literature, psychology and a good measure of philosophy, while time and times passed.
Finally, now in his thirties, after some ups and downs, he graduated with a diploma in educational science. At the end of his studies he married. The couple had two children. His wife made a career, earned the money, while at home he took care of his family and household, only interrupted by a few hours a week working in a record store in Lüneburg, the city that has become his second home for the last 50 years. Everything developed satisfactorily, the adult children left home to lead their own lives, and the remaining couple enjoyed the happy relationship with a few short trips to the Baltic Sea on weekends.
There he was sitting on the beach one day while his wife had gone for a swim, fiddling around with “the alien” in his hand, the “new” smartphone (a Christmas present!). A sudden curiosity led him to the graffiti button. After pressing it, the display offered eight colors and a digital brush for use. First he wrote greetings to family members on some photos he had taken, then he started to paint moustaches on clean faces. He was amused and smiled. The inner child awakened and he was hooked on something that has changed his life in many ways since then. He began to turn photos into pictures. He became curious. The “old man”, began his exploration of the possibilities of this medium of young people. The photos he took became the basis for his pictures, and he constantly expanded his possibilities and ideas. He redefined the cutouts, freed the pictures from context, invented new contexts, freed lines from content, composed basic pictures. (playbacks, as he called them), sampled objects from other pictures, used them as a means of communication in the original picture and much more. From the beginning he developed what today can be called his artistic program – not to be limited. He has succeeded in this to this day, he has remained curious, he experiments, still searching, still in motion. Several hundred large and small pictures are piled up in his workroom, documenting this process. Many of them are still nameless, buried under the influx of new works and experiments. Some of them are shown here, freed from boxes and cartons, and baptized for the first time.

This is his first, his only website. Whatever the future will bring, it will be here, debuting on these pages. New ideas, new images, new art. “Liked” this site, share it with your friends, write to the janitor: he is very busy, but whoever has questions will get answers.

If you want to contact us, please use the form below: