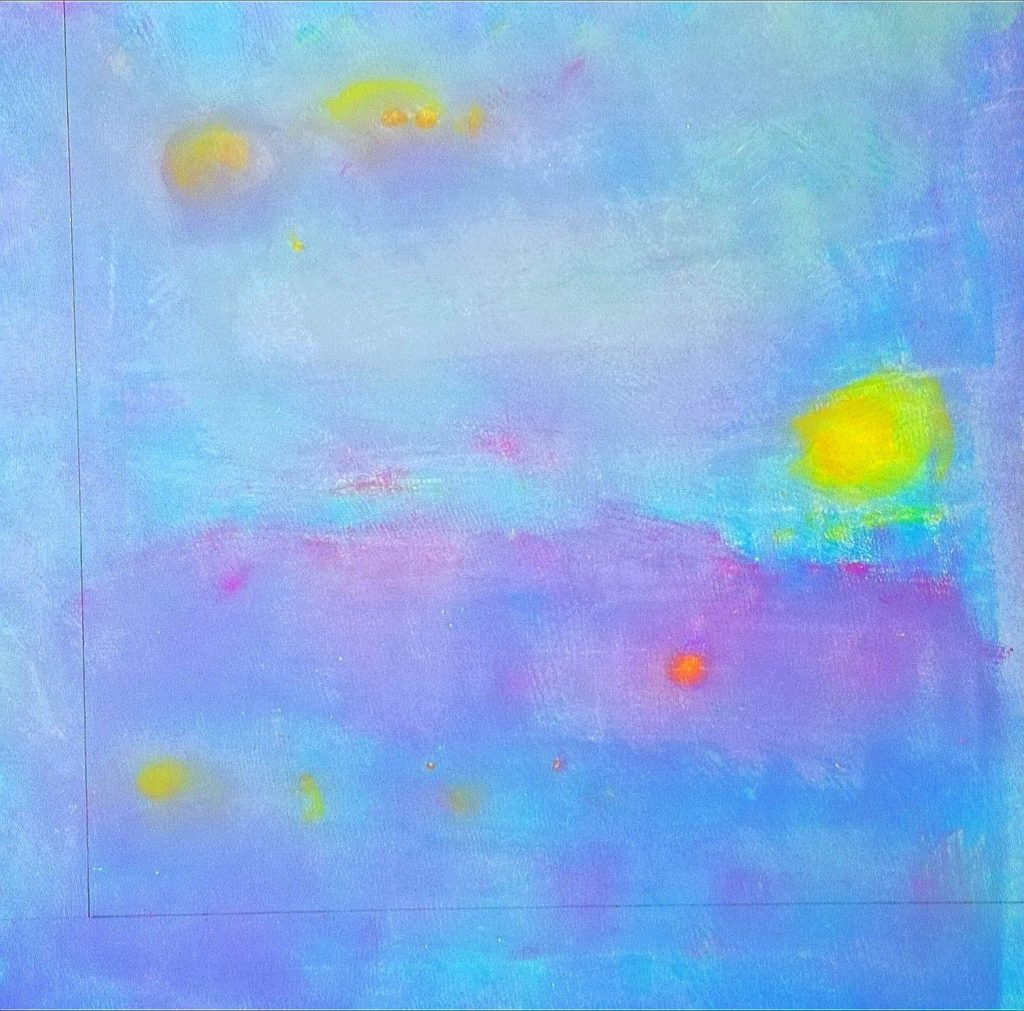 about abstract painting – a stream of consciousness

Yes, I know this text is too long…. ( I wrote this even before I decided to add some thoughts on the subject, so this is even more text. )…. But every delay makes it even longer, because something else needs to be said more precisely. Words are constantly rushing ahead of my own understanding. Sentences are written and I try to grasp them when they have taken their form….. (So this text even comes with a more concise hint of its subject matter by changing the headline)…. Here it comes again….

Whether my pictures are useful for discussing the following may be decided by the viewer in his or her own freedom. At this moment, I would like above all to share my “stream of consciousness”, which “flowed through” me while reflecting on the special nature of abstract images and on the experiences I myself have had with this task. I’ll switch to the stream now – pssst, we’ll just listen in …

…. When a so-called free artist paints freely, i.e. without a model, without representing anything from the outside world, i.e. what we would generally call one of the meanings of abstract, he can only rely on his subjective feeling as a judging authority, because he would no longer be free if he were to accept an evaluation idea conceived by several people and negotiated between them. He is also free insofar as his judgement does not necessarily have to be based on previously unimagined criteria; in this context, freedom means achieving an inner certainty unimpaired by anything external.

Whether his work is aesthetically responsible, i.e. whether it can be exhibited with a clear conscience, is something an artist can only decide subjectively. If this is so, then I also recognise in it my situation in the intermediate contemplation of an abstract painting in the process of being created. The question to myself is basically this: Is this now already THE PICTURE or is it so far only a PICTURE, or not even that.

The art public, i.e. the people who generally turn to a new unseen work as viewers in a gallery, in principle mirror the process of its creation in the reception of the work. Since the picture as an abstract has discarded the connection to the representational and to other references, it can only be perceived in its uniqueness. This perceptual performance presupposes an “educated” viewer. Not educated in the sense that one knows something or a great deal (by heart), but that one feels something inside. It is the emotion, the excitement that accompanies the contact between two subjectivities through the picture. THE PICTURE, which the artist has manifested with his own picture through his work as something meaningful to him, emerges anew in this process of meaning as THE PICTURE, which is meaningful to the recipient, when it is received by the viewer. This sense of THE PICTURE is not something that is attached to the picture, nothing physically defined, but a potency, a force. A work is always the transformation of an effect into a potency, an enabling of meaning. The recipient confronts this potency of an image. The work has an effect on him. The potency therefore does not define the kind of effect, but only makes it possible. It is its precondition. The reception turns to the work, but can only reflect and challenge the viewer’s  own subjectivity, its own world, because abstraction strips away the intersubjective parts of an image in the process of creation (one would have to speak better of a process of creation, if this word existed).

This process creates a pure image. This means that there is no identity of meaning between THE PICTURE on the creation side and the recipient’s judgement of THE PICTURE on the reception side. But on both sides of this process, meaning is perceived in the work, because the reception process itself is a search for meaning. Through the sense of an image, the elements of the perception of the image combine to form a Gestalt, which, however, in the case of abstractness, is the Gestalt of a concept. So there is not only a concept of Gestalt, but there must also be something like a conceptual Gestalt.

In the absence of subjectivity, truth becomes possible and visible, not physically but in a kind of synaesthetic cognition of coherence in itself, which one could also call “purity”. It is the figurative side of truth. In the quality of purity, think of the story of the immaculate conception of Mary, the Jesus/Mother of God in the Bible, we humans have always seen the divine, God is the categorically unrecognisable figure in the abstract, a kind of SUPER-SENSE. His incomparability is based in his imperceptible form. But only in this way does it make sense. He is the goal of our very own sense, which is a sensual or ascertainment of meaning, a reflection. Only with the idea of a God does life make sense, or as sense, God exists as our God. But always in a subjective sense that is so directly accessible only to me, as a subjective God.

The abstract image is thus in the form of painting what religion, the thought complex of the divine, is in the form of the imagination. Such an image refuses any concretion and at the same time, through these qualities, also refuses the idolatry that lurks at the bottom of every representational image. Instead of idolatry, one can also speak today of an ideologisation of the image, a taking of divine images into service for profane purposes, gladly also as war. Abstract images, on the other hand, shield themselves from content through their invisibility. They have an empty space. This void becomes the starting point of an unconditional thinking, one can also call it meditation, which against this background one could name as the attempt to experience thoughts that appear in the state of non-visibility as intangible…. not tangible and thus not comprehensible. Meditation is therefore thinking without concepts. Instead of reaching for the intangible, one opens oneself to it and experiences it as evidence, a knowledge that one does not draw to oneself with power and interest in the thinking process of comprehension, but which comes to one and shines from within. An insight gained in this way cannot be exuded again as an ideology, because evidence collapses when it returns to the outside, like a delicate web that one can look at but which cannot be moved from hand to hand without being destroyed in the process….

Here the stream suddenly breaks off …. and silence reigns again, or rather the noise of being remains until some event in the real environment brings us back into the jungle of concretions that we perceive as our everyday life.

About the translation. (Translated with www.DeepL.com/Translator (free version)

I found this text very hard to translate, because it operates with possibilities , that the german language makes possible, the english sister language denies, There is no way to make the transition with identical thoughts. So if you are capable of reading this post in german,  I recommend : Do it: