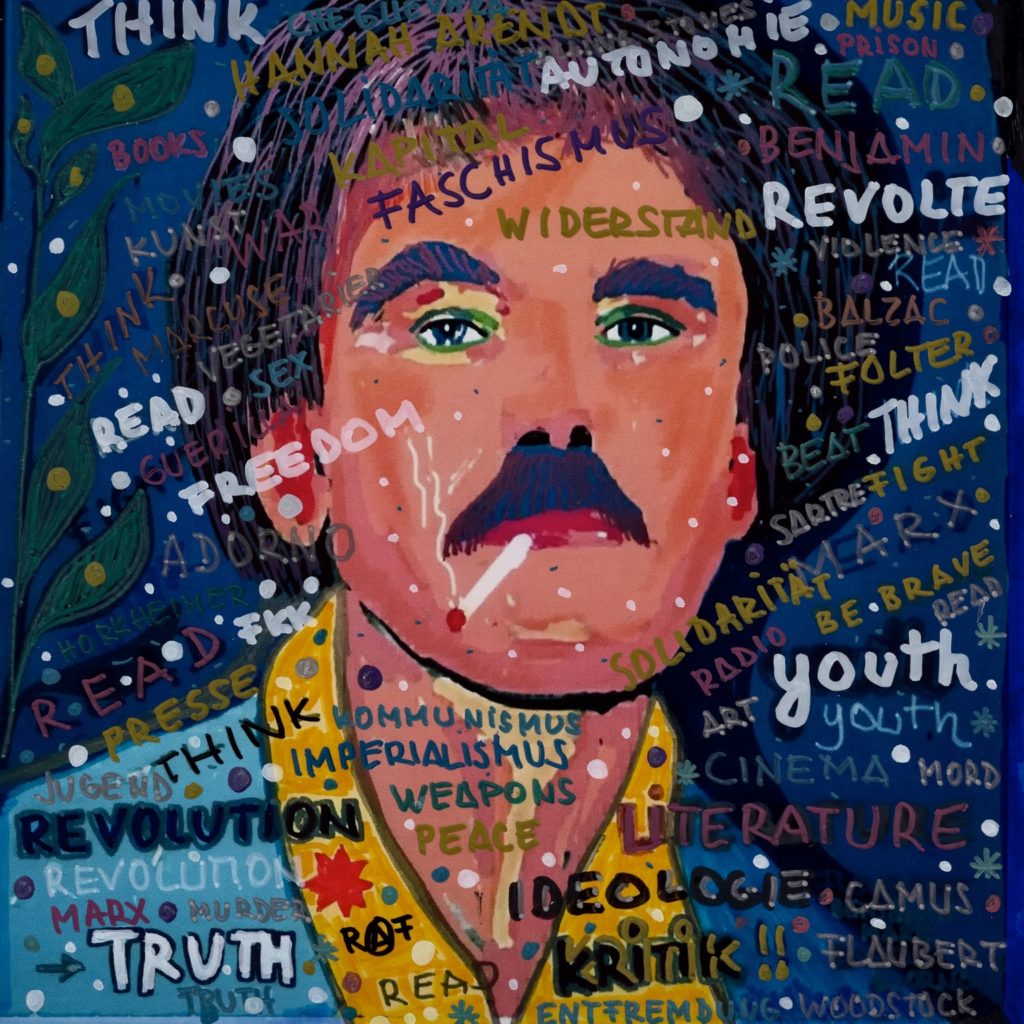 I wrote a letter yesterday and today I brought the picture into a final version. I had painted it shortly after his death to dedicate it to him at some point. A first version was posted to my friends on my Facebook page a few days after the news of his death. Since my website became public, the opportunity has come and the moment has come for me to dedicate my picture, completed today, to my remarkable university teacher Wolfgang Pohrt. In this case a letter (with the kind permission of the addressee) tells what it is all about, and so the letter (with only a few necessary additions or corrections) was:

Friday, 11.05.2019 I unfortunately have an appointment, so Thursday remains for a meeting. Exactly on this Thursday evening there is an event in the university that I don’t want to leave unmentioned. It serves the memory of Wolfgang Pohrt, who died around the turn of the year. He worked as a sociology lecturer at the university for several years and has his admirers, among others A:, B., C. and me. By the way, this guy from K., whom you also know, as I know, would have preferred to follow him at every turn, back then.

Pohrt was a mentor of intrepid thinking and sophisticated formulating and had soon taken up with almost all the top dogs at the university. In the eye of this hurricane of imaginative partisanship and intellectual aggressiveness, we listened to him in his seminars and heard him say in a friendly voice how outrageously absurd and redundant some of our papers were, and learned with great pleasure how right he was. So without him we wouldn’t be who we are now. I think everyone who took part in his seminars at the time will say something similar. What could it concern you, why do I tell you this?

That evening his publisher Klaus Bittermann talks about him and will read out some of his writings. These little essays, rarely as long as essay treatises, are full of surprising twists and syntheses, as if one were taking a bath in words enriched with the bath essences Pardon, Titanic, Karl Marx, Micky Maus and Hannah Arendt. If you’re interested, we could start our meeting in the afternoon, have lunch with us, and then go to this talk, or you could go home before we discuss the most important thing. Anyway, your choice. Of course, it can also be a failure, because the master of ideology criticism will not be there to defend himself against his appropriation by today’s ideologists. And even if it is only the ideology of his worship, they may praise

Tomorrow I will be in the city again at 1 pm at X. Maybe this will fit into your path-scheme and we will see us at least once more this week.