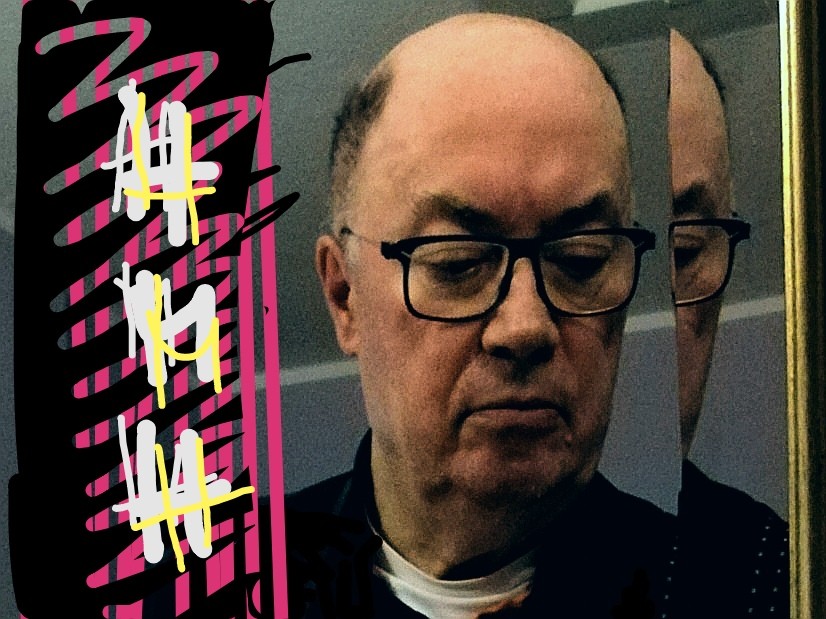 All right, I said to my friend. Persuaded! We are making a website for my pictures. Then you have to write something for it, which we can put at the beginning, you said. I think about it, I said. I started to look at my pictures. What came into question ? But the task of writing a text remained unfinished for quite a while. But then I woke up one morning and knew what I could write about. “There is something I want to tell you…..” * is the first line of a Ronnie Lane song for the Small Faces, one of the big groups of the sixties. The song I was singing when I got up was a reaction to another thought I had had that morning. How can I justify the obvious presumption that I, an absolute nobody without the appropriate training, wanted to introduce myself as a “maker of pictures”, but somehow also as an “artist”.

I had the idea of announcing a kind of self-experiment. I wonder what would happen if I just let things happen. Before my pictorial age I had been very interested in writing lyrics for songs. And that morning I remembered what I had read on the first pages of a book about songwriting. At the beginning of this book the author Andrea Stolpe**, herself a songwriter and teacher at the Berkleemusic songwriting programme in the USA, had begun her reflections with the encouraging statement for all beginners: “When you try to write a song, you are holding the pen of an artist “*. But what is true for a beginner in songwriting can also be formulated for a beginner in visual arts. The moment you start to paint a picture, with “the pen of an artist” in your hand, you take the perspective of a painter. This means that even the beginner or amateur has to make decisions from the beginning, which are artistic decisions. One becomes an “artist” by turning to a free creative task, even before the first contact of the brush or another tool with the “canvas” takes place. Becoming an “artist” means taking on a role in a new play. I started to take on this role in the course of 2017, or should I say, the role has taken over me. Sometimes it feels that way. For whatever reason, I called this dramatic figure who had started to make her own pictures “hausmeister-heuser”.

The occupation of my self by another self, the hausmeister-heuser character, was made possible by a technology that is at hand every day and every night and almost for everyone. It is the smart phone, also called mobile phone in Old Germany. It is a perfect tool for the beginning. It is the canvas, it has the brushes and the colours. And at the same time it is also a teacher. Because every painting that is collected in its memory is a challenge. You can follow the lines of a photo with a stylus or, for now, just with your finger, as I did, or cross these lines, you can choose similar colours or change the colours completely, try to paint every grain of sand by inflating a picture or concentrate on the contrast between dark and light. And again and again I heard the encouraging prompter from the mobile phone talking to me: Try this, do that, don’t be discouraged. See what happens. Be simple, be complex. Stay receptive, find your style, or deny any style. Above all, don’t accept boundaries like officially certified qualifications. You are not a technician who can do something wrong or fail, you are an artist! If you like! And your results are art, and you can keep pushing that art until it has become your art.

And at some point I gave up resistance and became this hausmeister-heuser. This is the real path to Pop Art. Not when artists deal with popular and everyday things like soup cans or urinals, but when people on the street, free the creative self that lives in each of us.

On this website I try to hold on to what happens if you dare to let yourself go into the stream of a creative action again and again, using the example that I am myself, namely following this hausmeister-heuser. If you are interested in coming with me, I hope you will feel welcome. So come along, or as we, old and young, have learned to say: “Follow me”. And start making your own pictures!

– I translated my contributions into English with the help of a translation tool (www.deepl.com). I was thrilled by how good these translations turned out.***

This website wants to follow and document a process. So it follows a chronology, which, so is my heroic idea, should build up to a “work” of its own kind. A possible failure included. I will show my pictures, I will comment on them, I will tell some stories about them, I will try to write about what I do, casual and thoughtful things and what else belongs to me, mix it in. But I will also occasionally intervene in what has been recorded, my texts do not have the status of historical documents for me, but are building blocks of a narrative. At the appropriate time, I will summarise, perhaps exchange pictures, change formulations, if I consider this important for the overall presentation, or if it makes thoughts more comprehensible. So I want to improve the presentation, not falsify it.

Last but not least: I invite my readers and viewers to a dialogue.

***It is impossible for the reader, as it is for me in the meantime, to really distinguish between how far the tool has written and where a formulation of mine stands. But I don’t want grades for my English either. The main thing is that what I want to say comes across. In any case, the respective German text is completely mine.