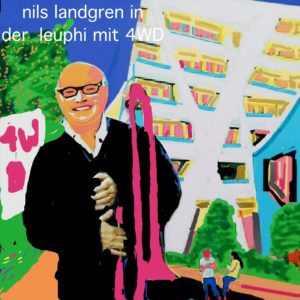 Many thanks for the wonderful concert in Lüneburg. That was pure music, one could also say that it was true avant-garde, because in this concert the genre boundaries not only blurred, but no longer played a role at all. The political utopia of a universal harmony of individualized and social life, from which political realities have been moving away in a frightening way for some time, becomes at least a musical reality with 4WheelDrive. It was the quality of the performance and the never questioned obvious joy of doing that made this possible. Here it was not the arrogance of jazz that led to the narcissistic lust of deconstructing pop, but respect for the song was the prerequisite for luring it into the sphere of jazz seduction and improvisation with the instinct of a musical Casanova. Nils Landgren in the picture really stands for the entire musical collective that offered more than just the already impressive sum of his respective abilities, but for precious moments allowed the audience a glimpse behind the scenes of simple reality, a glimpse of what in earlier times made people speak of heaven or eternity, and sometimes the musicians looked as if they had made the same experience as their audience.

4WheelDrive, drive on like this, no matter how. After all the sophisticated fun the audience experienced that evening, it only can be great.