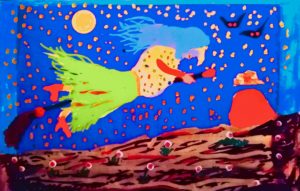 Once I was asked, with a benevolent but also slightly challenging smile, if there weren’t a few moons too many in my pictures. Did I do something wrong? I asked back. As a painter novice you quickly find yourself pushed into a corner from which you can no longer get out without outside help. Something like feelings of guilt arise, the heat rises to your head and your thoughts, feeling caught, hammer: why only, why, why at all. Of course you can talk your way out of the stubbornness of artistic inspiration, which, clandestinely, passes by reason, and conspires to say to you: Paint moon, you fool, paint moon! And what other possibilities do you have? You don’t want to make enemies in these upscale circles of your own nervous system. 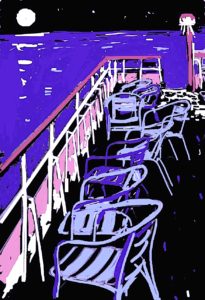 But maybe I also have very personal reasons, a remnant of self-confidence that has gone into cover appears, even if it’s that you simply find the picture with the moon even more beautiful. Here I decide, the painter of the picture. In addition, one would do without a strong symbol, one that no culture on this earth would want to do without so far. The moon alone does not create any meaning in a picture, but especially as a full moon it is a reference to the specific moment of the  depicted in the picture. Is the moon also trivial due to its omnipresence, and thus a disturbing factor within a composition? I don’t know? It always seems to fit me well. So far, so good!

But what am I talking about? I have already noticed that if I continue to move in this direction, I will never succeed in getting closer to the subject about which I actually want to tell something. About my favourite film. (Our favourite film). It’s called “Moonstruck” in the original, “Mondsüchtig” in the German translation. A pop artefact, with Cher and Nicolas Cage in the leading roles, in which nothing is accidental. This doesn’t necessarily reveal itself at first glance, but every re-experiencing of the film becomes a revelation. It is the abundance of scenic themes that repeat themselves from beginning to end, leitmotivically and in details, such as the opera theme, the theme of mourning, the theme of passionate love, the view of the beauty and transience of the human body, the situation of a convivial get-together while eating, the connective and centrifugal forces that a family context evokes, and very probably other ones I did not mention here.

This film succeeds in using all these themes, with a constant change of perspective, again and again for the progress of the film’s plot and to inspire the viewer during the course of the film for life with all its risks and unpredictability. To be addicted to the moon, the film says, is actually to be addicted to life. In the medium of the moon show I recognize and feel life itself in its diversity, beauty and grace. The moon is an influential human companion, serving as a catalyst for our feelings. LA LUNA. LA BELLA LUNA. As the grandfather in the film not only once exclaims. And I don’t want to do without this representation of the miraculous in my pictures either,