It’s full moon again, people and I quickly made another picture from another daylight picture not yet published by me. The basis is a photo I took at the JazzBaltica Festival 2018. At first my camera only looked at the pianist, then I noticed the photographer, who approached the lady at the piano with his voracious camera. So I positioned my camera in a way that I had both actors in the frame. Later, when I looked at the results at home, I also saw the passer-by who had approached the action from the outside and was so intensely coming in from the outside, as if optical paths were not always usable in the opposite direction. 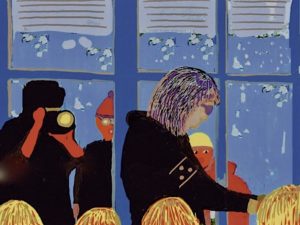 At the same moment I also realized that we listeners were also gawkers, so the musician was surrounded by a herd of glances. This gave me the idea of artistically aggravating the situation by painting the lady pianist with blackglasses and a band of blind people on her upper arm, supplemented by the formula for a lively social encounter as the title of the picture: See and be seen. The cynicism that flashes up in this title seems at first to have the pianist in its sights, but it can also be read as a critique of everyday voyeurism, which is no longer aware of its merciless self-evidence. 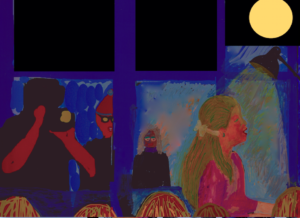 For the full moon picture I replaced the pianist with a girl at the piano, whose picture I kidnapped Auguste Renoir. I will come back to this picture at another time.