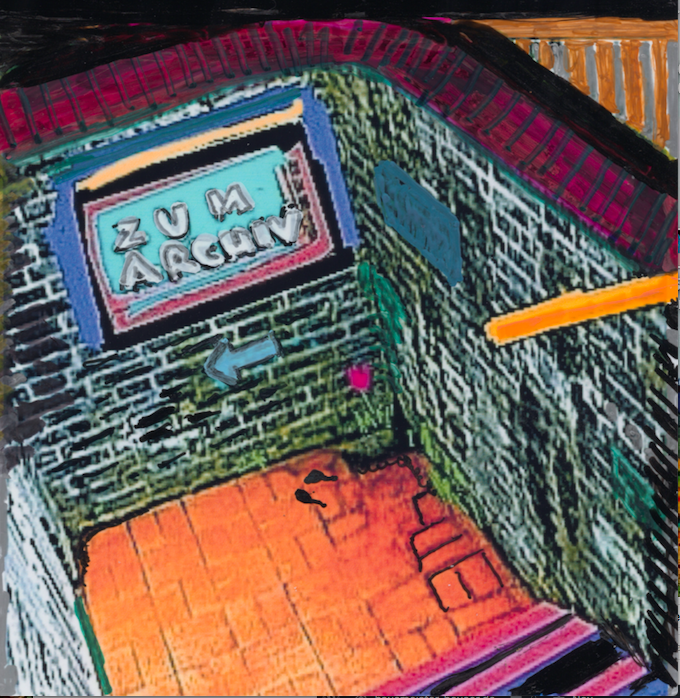 This picture opens a new category of this website: the HmH archive. Here documents are to be collected, which prove faultlessly what was or what could have been. We start with a re-publication of the HmH article from the Hanse-Zeitung, allegedly based in Lüneburg, namely the weekend edition of 01.09.2018. This article gives a first insight into the (not least also private) world of the hausmeister-heuser. We would like to express our thanks to the research department of this website, to whom we owe this rediscovery. At the same time, the department points out that the “Landeszeitung – für die Lüneburger Heide” has published a forerunner of this article with the largely identical title: “Ein Atelierbesuch der besonderen Art”.  It was about an elderly lady whose hobby is flower painting and who, due to a lack of sufficient sales, had turned her entire apartment into the stage for her paintings. It would be obvious to see here an inspiration for the following article about hausmeister-heuser.

A TRUE FRIEND OF POP-ART

“hausmeister heuser” paints enthusiastically and exhibits his pictures at home. A visit of a special kind to his studio .

Lüneburg.  Friends had told me that there was an artist in Lüneburg who did something very original. They couldn’t tell me more details, only that I absolutely had to have a look at his pictures. Was it now the summer slump, which impoverished our editorial staff in these weeks thematically or something else, in any case the easily mysterious references from my circle of acquaintances were enough to put me a few days ago on the track of the great unknown, who calls himself “hausmeister heuser”, very probably an artist’s name. Where there is a will and an Internet, the solution is often not far away, and so, after I had briefly announced myself by telephone, I had received the invitation to a visit from this artist in the twinkling of an eye. The problem-free nature of the whole process had somewhat unsettled me.

A few days later I stood in front of the door of a semi-detached house in a bourgeois environment, where hardly anything indicated a creative spirit, unless one took the view into the garden with the exuberant flower splendour of countless roses and rhododendrons as a hidden hint.

The greeting is short and warm, he reacts to my caretaker’s address with an almost mischievous smile. But then he immediately offers me the you with your middle name and a seat in the living room, which we enter first. My hopefully not too hungry gaze gets caught on two larger pictures, which seem completely unknown to me and yet decorate the walls with such self-evidentness that they can only come from my host.

As if he had been waiting for this moment for years, he begins his self-explanation, which apparently gets by without the questions of an interviewer. “You certainly want to know …yes, I am a lover of modern art, especially pop culture in its entirety,” says hausmeister – this is unmistakable. Each of his self-painted pictures somehow reminds the viewer of famous models from this epoch. Last but not least, it is the choice of colour that creates this impression. But this is connected with the special tools with which the pictures are created. “When I’m asked, I bring out my smartphone, and first create an incredulous amazement,” it gushes out of the artist, who discovered his talent barely a year ago.

Photos are the basis of his painting. Photos taken by his own mobile phone camera, or sometimes photos from the Internet, but, he regretfully adds, copyright regulations are so tightly knit that you have to be very careful with them. The colleagues from the music front are already a bit further along. Once he has decided on a photo, he begins with a process of overpainting, which at the same time should capture the essence of the existing picture. “The challenge is to paint a picture from the eight colours that the mobile phone offers me that, in extreme cases, does not actually contain one of these colours in its original state. hausmeister-heuser also points out that shades and mixtures of colours are not possible as long as this frame is accepted. But what appears to be a problem at first glance becomes the strength of these pictures in a kind of reverse conclusion. Their decided, even absolute colourfulness.

During this exciting reflection of his working methods, Heuser has almost impatiently risen from his armchair in the light-flooded living room of his house, which he lives in together with his wife Gisa, and asks to the first floor. But not only painting is hausmeister-heuser’s passion, but also music. The two posters in the staircase that show B.B. King and John Lennon bear witness to this, as do the shelves full of CDs that populate the study we now enter. With a certain pride, he points to a shelf wall that contains books, magazines and reference works on popular music, which my eyes have obviously not remained hidden from. He once had this fixed idea of dealing scientifically with questions in this field. “But then our two children came”, he returns from his old dream shortly afterwards. The future of the couple was quickly negotiated between the participants. The unconventional solution was found for the new situation, which made Heuser a househusband and his wife the provider of the young family. In principle, nothing has changed to this day. 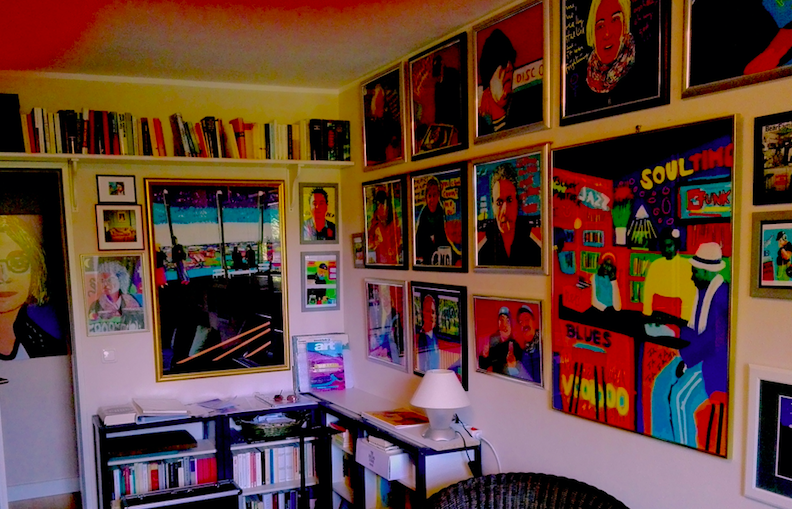 He has spread his pictures over several rooms, but he knows the limits of his exhibition frenzy. “My wife encourages me in my endeavours, but she also has the right to a free zone of hausmeister-heuser pictures,” he admits, ready for a concession.

For almost a year he has been infected by the painting virus (“you really have to call it that”), as he diagnoses with a certain astonishment. “I only became the owner of a smartphone at the beginning of the year, more for reasons of reason than inclination. As a swim-unwiller I sat in the beach chair at the Baltic Sea in late summer. My wife, an enthusiastic swimmer “since time immemorial”, “had gone into the water and waved to me, and I tried myself on a photo”.

Although his wife took up very little space in the end,” he continues, “this picture still contained enough Baltic Sea to qualify for a holiday greeting. He found the Graffiti category under Image Editing, and, gliding his index finger across the display of his mobile phone, wrote a humorous greeting to all family members on the photo, which he immediately sent via Whatsapp. “That’s how it started,” he says with certainty. “The child in me had woken up and also attacked other photos with a mixture of silliness and curiosity. On the remaining days of his holidays, he began the process, which continues to this day, of exploring the limits of the medium, which were first and foremost his own limits. What in the beginning were only dashes, soon becomes a process of painting the entire photograph, a process of design for which the photo triggers the starting shot, but whose finish line it does not determine.

In this way, in less than a year, about three hundred pictures have been created, which despite the limitations of the means and the medium demonstrate an astonishing variety of approaches and ways of painting. The flat characteristic of the pictures does not mean a superficiality on the semiotic level. With the help of simple but strong symbols and cleverly chosen text fragments, some develop an almost magical intensity of their narrative. The fact that it is often the quotations from pop and rock songs that come to the artist’s mind makes the whole thing round on the biographical side as well. Often these lines of text in the context of the songs have already achieved what the images in their entirety strive for, an artistic condensation of the reality of experience and feeling in the listener or viewer. Thus they join the picture, which confirms it in its peculiarity and experiences its confirmation through it.

Almost casually, he mentions his attempts to write texts for pop songs himself. Over the decades, attempts in this direction had bound his creative powers, but with few exceptions, they did not leave the house, where – Heuser speaks of about 200 to 300 songs – they lead an afterlife in inconspicuous folders, which no life has preceded. “Maybe they just aren’t good enough” he says thoughtfully, but he doesn’t seem completely convinced of his own harsh judgement.

So with the mobile phone painting he takes a late, but perhaps not too late attempt to share his creativity with an audience. There are encouraging moments, but a breakthrough is yet to come. Perhaps it’s a lack of clear lines, the lack of a “drawer”, but perhaps it’s the creativity of the latecomer, which has not yet been channelled, that makes him paint portraits today, landscapes the next day, then again it’s the subtle coloring of photographs that he shoots himself, or that gets in his way by chance and triggers an artistic impulse in him. We look around for some more time, and he tells the stories of the creation of some of the pictures, which describe the often surprising transformation of something familiar into something completely different, something new, but which in turn has a quality that can stand for itself. Perhaps you should tell these stories to an audience, I encourage them. He is sceptical, but also admits that at some point a website of his own would have a certain appeal for him. When time comes for advice, he flees for the moment into a commonplace. I say that I wish him that, and I mean that. We have another cappuccino together, talk about other things in life, and make an update appointment. Then we say goodbye. I hope he’s as serious as I am. Outside the sun is still shining, it’s still very warm. What a summer this year. (In August 2018)