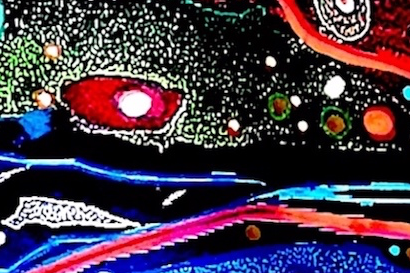 To the (very probably unnecessary memory) : I began with the mobile phone, with the pictures, which were already stored. At first these pictures, although I used them as background, still spoke of themselves and me of myself on these pictures. I stepped in front of the pictures, e.g. with characters; in appearance and the picture existed behind me.

In the meantime, this background often serves me only as a starting point for a transformation, the aim of which is to deconstruct the actual picture, to override its grammar, sometimes to make it disappear down to the last detail. Sometimes I tear a small detail out of its pictorial context, blow it up into a new model or background (blow-up), and develop an image on the basis of the new structure. If the enlargement process is large enough, it no longer reproduces the picture in its handcrafted, intentionally designed primary structure, i.e. brush strokes, blurring, etc., but the picture dissolves into the structure of the medium itself, which was not available to the first painter as an analogous level of design. The representation is only possible analogously, because the computer cannot understand it as a requirement of itself. This means that what is created by mechanical processing with the computer and can only realize its appearance on paper is a work that can no longer be attributed, because it cannot have originated from any design intention. The picture no longer has an author, but only a causer. If I now paint my ideas into this structure, I establish my authorship on a second level, which in turn and logically is analogous.