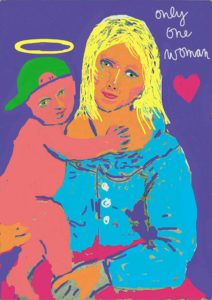 A whole room in the cellar of the apartment building in which we had lived since 1958 was dedicated to the storage of supplies in our family. Here the preserves stood in glasses, plums, apple sauce, pears and mirabelle plums. Flour, sugar and salt were stored here. Noodles, some canned meat, bag soups, maggi bottles and everything else that was needed in the daily household. Here stood also the beer, export said the label, which I was allowed to fetch already in young years under risk of my life for my father from the dark cellar into the dwelling in the Hochparterre. Some boxes of white wine were also stored here, divided into Rhine and Moselle wines, one in green bottles, the other in brown ones, of course purchased from the omnipresent Pieroth sales department. Red wine became a topic only in the seventies.

t was the aftermath of the Second World War that had materialized in this shelf. On the one hand the increased prosperity since the end of the war found its expression in these ordered columns of goods, but at the same time storage also meant the preparation for the next one, which every “realist” of that time expected not far away. The throwaway society, as it was soon to be called in socio-critical discussions, also broke through this meticulous plan of use by pushing more and more non-food items into the cracks of this order. The economic upswing brought with it the exchange of old things for new ones, although these still fulfilled their function, simply because they were more beautiful, above all “modern”. The sacrilege seemed smaller, if one assigned them at least one place in the same house, which they were however never so completely able to keep. There were old lamps, old pots, indefinable current-powered machines and other stuff, whose practical use did not open up to me at that time. 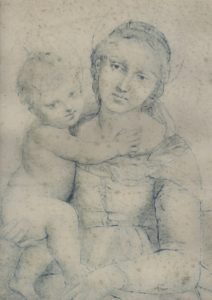 Between all this stuff of a permanent intra-family household dissolution I discovered sometime a dusty picture. It showed a woman with a child on her arm. I took it with me from an impulse I could not quite comprehend, freed it from the dirt of careless storage and gave it a place on the wall in my room.

Somehow it became mine and it remained mine to this day. Not always it hung on the wall, also with me the career of the picture was unsteady. But I never disposed of it. My father told me on the occasion of a visit of the young family that we were sometime, that he had bought it in the thirties during his study time in Munich and that there it had decorated his small student’s shack. In this picture his ideal of a woman appeared to him. At first this remained a mystery to me. My father certainly had a sense for the woman as a sensual being, as his cautious hints should sometimes secretly tell me. He noticed women who were sexy, women who put Playboy’s pin-ups formulaically into the picture. But in this picture of a “Madonna with Child” he must have seen something like a metaphysical pin-up. At the moment it is hanging in our living room. I cleaned it and framed it again and took a photo of the motif. When I started painting it in my own way, this picture was taken. I don’t know. I am still undecided. May others judge it. You for example…

Only One Woman was a hit of my youth in the sixties, A One-Hit-Wonder of the singing duo THE MARBLES, written by the Bee Gees. The title, however, was not a moral imperative to appear in the context of my picture, but expressed the astonishment of a womanizer that something like a single woman could gain such power over her own feelings through the medium of love (perhaps it was also something “sexual”, (a word one learned to spell at that time), even though there were many others that would be an option. “she was only one woman, BUT I’m gonna miss her…” sings the reluctant monogamist. Yes, life can be hard sometimes.