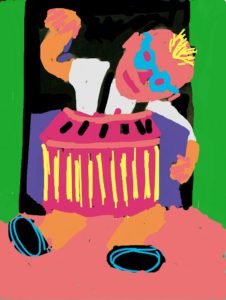 You know, i listened to pop music my whole life. It started with my father playing the harmonica in the evenings when he had time to spend with his family. At first it was just him with me and my mother. He played songs he had learned at the British prison camps after the end of world war II, where he for the first time in his life learned to play an instrument. He also sang and my mother sang harmony. Must be old folk songs they knew from school. These memories are only short sequences combined with warm feelings and visions. the heat of the oven in the corner, the smoothness of the blanket we were sitting on, thrown over the bed in the living room, where my father used to sleep, when he came home late in the night after working in his small architecture bureau in the city.

When business was getting harder and the first glances of success appeared, he was rarely at home in the evenings, but the music kept playing, coming from the radio while i was fighting a war on the floor with my small figures of cowboys and indians. When the money came, a record player was added to the household. But there was not only a record player, it was a designed beauty, a Braun SK61. 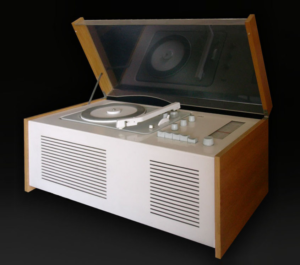 It must be that since then I feel the synergy of visual and audible aesthetics. I don’t know why, but I do remember for sure the two records that came with it. A 10“ of Porgy And Bess and a 78 with Caterina Valente singing „Tipitipitipso“

With the record player came the chance of having a party with some friends. But before the party took place my father made sure he had the best new hit songs at hands to start the fire. A few days before the proceedings he then came home with a handful of new records he bought in the shop at the end of our street. I have no memories of the actual events. I must have slept like a big bear in a very hard winter. But on the next day I remember the clean-ups, the torn snakes of paper on the floor and the mashed peanuts and some other strange things that witnessed the success of the event and the room still smelled like an huge ashtray. The next days i listened to the new records for hours, soon becoming especially interested in the b-sides of the singles. While the a-sides were well known to me from radio play, the b-sides were the dark side of the moon. Often the slow songs made the b-side, and their emotional impact, later I learned to call it the blues, somehow impressed me, a child of 8 years. It’s crazy, it’s strange. If you like to have this mind blowing experience, too, here’s the link to one of these tunes.

When i think about painting nowadays (i have this moments) i think about it in terms of music, mostly rock music. That happens to be my aesthetic system, it seems. When i look at something with an aesthetic perspective,  it must have some musical quality about it to get me really interested. A picture that gets me, must have the feel of a song, it may be simple or it my be more complex, but for me paintings have rhythm and rhyme, there has to b a mood and a structure. My paintings often are  picture tracks to songs I have in mind, or to that songs I am actually listening to while having another try on painting.