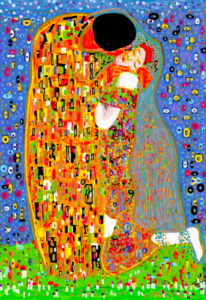 As in music, there is also in painting the confrontation with cultural heritage, with the past and the pictures that others, and above all of course, unattainably greater artists have painted. Just the presumption to repaint a brilliant painting in any form is a wonderfully complex feeling that I like to expose myself to. For me, it is not an attempt to imitate as flawlessly as possible, but rather the cover version of a work, as it is understood in modern pop and rock music, as a process of a rather playful appropriation of the past of one’s own profession, which also gives the freedom to simplify or even change. But now to the events whose goal-oriented idea gave the name to Gustav Klimt’s masterpiece, on the level of everyday life, especially for a still young teenager, however, brings with it great challenges.

There’s got to be a history. But I remember almost nothing. She lived in the same settlement where two of my cousins and a cousin lived. There were narrowly staggered terraced houses in several rows. Cousin and a cousin belonged to an informal group of young people who, by chance, were all about two years older than me in this settlement. The processes of pair formation were correspondingly more advanced here. Who’s in love with whom? was a topic that dominated the afternoons. These people went to dance classes for advanced dancers, while in my class on the parents’ evening without the knowledge of us students questions arose about which dance school was recommended for us beginners.

Since I had occasional access to the older group through family relationship, I gladly took this opportunity to make contact, stood around in the middle of the older ones on the street and also entered an apartment that was offered by the temporary absence of parents. These “absolute beginners” cliques were not yet about sex in the real sense, the vague respect for its possible consequences was still unbroken, at least among these middle-class kids. It was about smooching. Who is making out with whom? was the question and the act of making out was the seal on whether you were going with someone, that is, a couple.